Top 10 Business Leaders in the History of Mankind, and What We Can Learn from Them

The world has a fascinating story of great business legends, leaders that have changed the business world forever. These amazing business leaders had one thing in common, a clear vision of the future and the leadership skills needed to manifest the very future they desired.

As Klaus put it, “There is a difference between being a leader and being a boss. Both are based on authority. A boss demands blind obedience; a leader earns his authority through understanding and trust.”

Let’s dive in and see what sets the top 10 business leaders in the history of mankind apart from the rest of the crowd. In business history, Henry pioneered the Model T that did launch not only engines but also availed a more efficient means of working. He introduced a new approach to production that lowered the cost of materials as well as the final product.

His business leadership changed vehicle accessibility in America and eventually to the world around him. He changed the course of history, which truly does pay.

Ford’s outlook and perspective on business life were on another level.

He believed that success was worth every effort: “Be ready to revise any system, scrap any method, and abandon any theory if the success of the job requires it.” Steve Jobs, the founder of Apple, definitely adds to the list. He is considered one of the most influential business leaders, innovators, and entrepreneurs that changed the world through his technology.

He may not have invented computers, but he reinvented the wheel, making computers more exciting and accessible than ever before. In the time of his tenure at Apple, he caused a revolution in the mobile phone, music, and personal computing industries.

The business skills exhibited in his leadership changed the way humanity read, played, and listened to music as well as how people went about their work and their lives.

The smart devices introduced by Apple were a game-changer and did set the stage for the mobile boom experienced in the 2000s.

To date, Apple remains a major contributor in the electronic and technology industry. To become the first American billionaire certainly takes some severe business savvy. This is exactly what the world received from John D. Rockefeller. He wrangled and ran the oil economy of America in the nineteenth century.

He brought travel and transit at the cheapest cost America and eventually the world had ever imagined possible. It is from standard oil that America primarily derived the shape of its laws and public attitudes towards monopolies.

From John, the world learned that nothing is impossible when it comes to translating a business idea into a golden opportunity:” Singleness of purpose is one of the chief essentials for success in life, no matter what may be one’s aim.” When the industrial revolution is mentioned, many historians cite Andrew Carnegie as the transformative force that ushered it in.

It is the iconic steel baron’s work that made it possible for America to expand its middle class through Andrew’s use of middle managers and other professionals.

Carnegie stands unopposed as one of the most influential leaders in the history of the business. He firmly believed that one’s level of achievement was primarily dependent on one’s level of self-motivation: “People who are unable to motivate themselves must be content with mediocrity, no matter how impressive their other talents.” In the world of the creative and the corporate, Walt Disney is recognized as the entrepreneur and animator that created the internationally-beloved brand.

The Walt Disney Company has captured millions of hearts worldwide with the founder’s work showing the value and heart of creativity in business.

In the world of entertainment, Disney’s storytelling served not only to entertain but also as an effective leader in developing trust in his brand.

The mission of the company is to not only entertain but also inspire and inform people throughout the world using the power of unparalleled storytelling.

As a brand, the Disney Company reflects the iconic brands through creative technologies and innovative minds that ranks the company as a premier in the world of entertainment.

What stood out about Walt for some is his value for family and his firm belief in work-family balance: “A man should never neglect his family for business.” Beyond being a Havard dropout, Bill Gates is best known for being the founder of Microsoft, which currently stands as the largest corporation in the world dealing with PC software.

PC stands out as one of the most recognizable computer and laptop brands. As a remarkable business leader, Bill Gates has consistently ranked among the most wealthy business people since he founded Microsoft.

Bill Gates had ranked as the richest man on the planet for a while, thanks to his incredible business competencies.

Over time, Gates has transitioned from active participation in business to pursue philanthropic endeavours such as the Bill & Melinda Gates Foundation that seeks to increase clean water and sanitation access in third-world countries.

In the history of business, Bill Gates has achieved immense success and proved to have the effect of a revolutionary power that is irrevocable.

The great leader declared his intention to leave the vast majority of his wealth to philanthropic causes. Buffett is one of the most successful business investors of all time. As many consider him to be the “Oracle of Ohama,” he is best known as the CEO of Berkshire Hathaway, which is a multinational holding company. Berkshire handles billions of dollars worth of stock every year.

From his business competencies, Buffet had an uncanny intuition to the financial market that produced astounding amounts of wealth for him and his colleagues.

As a result of his business leadership, Buffet consistently ranks among the top of the wealthiest people in the world. He is an expert in stocks and trading.

No wonder many top financial holders try to emulate his approach in the field. According to Forbes Real-time Billionaires List, Jeff Bezo takes the lead as the world’s richest man. Jeff is best known for being the founder of one of the world’s largest corporations: Amazon. Although the company stands as the largest company in the world, it started out with an incredibly humble beginning.

Bezos founded Amazon back in 1994 in his garage. What started as just a simple online bookstore eventually developed into an e-commerce powerhouse.

Currently, Amazon ships to more than 50 countries in the world and distributes millions of unique products globally every day.

Despite having to start small, Jeff had the vision and kept his passion to one day revolutionize the e-commerce industry. In the process, he grew his business into the largest corporation the world has ever seen. Elon began his journey of success after he co-founded X.com, which later became PayPal. In 2001, eBay bought PayPal and Musk was the largest stakeholder in the company at that time, with stocks valued to be worth more than 1.5 billion.

Currently, PayPal is one of the largest online payment platform on the planet that facilitate international transactions globally.

After selling PayPal, Musk founded SpaceX, whose objective was to get to Mars and make space travel more affordable. Later in 2003, he founded Tesla Motors, which he intended to be the first mass-producers of electric vehicles.

Falcon 9 Rocket is one of SpaceX’s signature, which has already begun missions for the company. Tesla stands as one of the most well-known electric vehicles in the globe.

If the world and students of business history have learned something from Elon Musk, it is the fact that he was a force with the knowledge and vision to ultimately push the boundaries of modern technology. Have you met or heard of people that succeed in changing the world by defying all odds? Jack Ma is one of the great business leaders that the world has seen.

He was the first entrepreneur from mainland China to ever appear on the cover of Forbes magazine.

He is the founder of Alibaba Group, a group of internet companies. The most remarkable part of Jack’s story is the fact that he had not heard of or interacted with the internet until his short trip to the United States.

Before joining Hangzhou Teacher’s Institute, Ma was rejected from university 3 times. As if that were not enough, he applied for 30 jobs was turned down for each one of them.

After his trip, he returned home and created a small website on China and different Chinese products. This was the first step towards his creation of a company that would hold the record for the largest IPO in history. What an audacious man!

If there’s one thing we can learn from the world’s greatest business leaders is that backgrounds do not limit how far we can thrive.

Overcoming numerous challenges, believing in themselves and their ideas even when they did not make sense or seem possible, these legends transformed the world of business forever.

Remarkably, they were all at different times and generations, yet they all saw the deep needs of mankind. These top leaders tapped into the needs, offering the world solutions and, in return, are making fortunes.

One thing remains clear throughout, their successes were not built overnight. It took time, enormous effort, sacrifice, and patience. 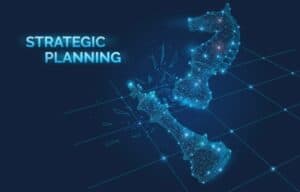 How to Write a Successful Strategic Plan